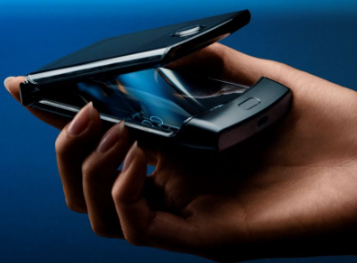 The design of the Motorola Razr is curved and under a chin bottom. The phone’s primary display is a 6.2-inch Flexible OLED HD Plus screen.
The razr is a flip phone. Motorola is a model that once made waves with flip phones. Moto, now in Lenovo’s hands, is trying to regain that legacy. There is no decision as to when the razr will arrive in India. Samsung’s flip phone, which arrived in India, has been selling for 1,64,999 Rs. So it is likely that the same amount will be charged to the razr in India.

Motorola has just launched the E-SIM model. That means there is no SIM slot. But when the model is launched for the US market, when it comes to change countries, the SIM slot will also be available. The phone weighs 205 grams.

Features and specifications of Motorola Razr 2019

The design of the Motorola Razr is curved and has a chin bottom. The phone’s primary display is a 6.2-inch Flexible OLED HD Plus screen. The screen resolution is 876×2142 pixels. It has a body screen ratio of 21: 9. When folding the phone, you get a second screen of 2.7 inches. Its resolution is 600×800 pixels. This Quick View display can be used to take selfies, view notifications, and control music.

The Motorola Razr has two cameras. The 16MP camera can be used as a selfie during folding and as the main camera during an unfolding. It can be found in the center of the back of the phone. This phone is Apache F1.7. This camera has many features like Night Vision. The second camera is seen at the top of the main display. It can be used as a selfie and video calling.

The lower chin has a fingerprint sensor and a USB Type-C port. Among other features, you get the Qualcomm Snapdragon 710 octa-core SoC, 6GB of RAM and a 2510 mAh battery. The battery supports a quick charge of 15 W, however, given the relatively small size of the battery, it would be interesting to see if the charge lasts for a day. However, this is quite possible, since Motorola Razr 2019 users are more likely to use a smaller task display for a set of tasks and only switch to the main screen for things that require a larger screen.

The phone runs on Android 9 Pie operating system. However, it is rumored that it will get the Android 10 update later. Additionally, Motorola added NFC support, Bluetooth 5.0, Wi-Fi 802.11ac, 4G LTE and GPS. The Motorola Razr measures 72x172x6.9mm under developed conditions and 72x94x14mm in folded condition.

The Motorola razr fits comfortably in your palm or pocket when closed, and opens to reveal a deep, full-length touch screen. The new Razr is an attractive and modern smartphone unlike any other.
Razr is turning engineering into an industry challenge. The Zero-Gap hinge rinses the shaver on both sides and the attractive design protects the main screen. The touch-enabled Quick View display lets you see, respond, and move on. Play your music, take selfies, see notifications, and more – all without opening your phone.

Another awesome thing you can do is a
subscribe or check out my other
Article right over here and you may
learn something new.
our site –LatestUpdatedTricks